What this means is that a concept map tries to outline the big picture. This is a characteristic that the concept map shares with the mind map but the usages of the two are completely different. A mind map is used more specifically for brainstorming or note taking whereas concept mapping shows relationships between ideas, images or words. Another contrast between mind maps and concept maps is that mind maps center around a specific topic/idea and concept maps may lead of to other topics.

The process for concept mapping always starts with a topic or question that the rest of the concept map is focused on. The idea or question is then explored further in a downward hierarchical structure by making relations between the concepts. This is why people may refer to concept maps as "context dependent."

Examples of a typical concept map could start with a question - "How can birds stand on electrical wires without getting electrocuted?" You would then explore the possibilities such as "Because of their feet," or "Because of the effect of electricity on birds."

Concept maps help you to grasp an overview, rather than the airy fairy bits of specific evidence/detail. That does not mean that concept maps are not specific, just that they try and get the big picture so that your brain can understand what the whole thing is about. For this reason, some people classify the concept map as an effective study skill.

Concept maps, due to the constant flow of ideas, are great for triggering creative thoughts and keeping ideas flowing. The ability to have ideas constantly flowing throughout a piece of work is a first-class study skill and an essential asset to note taking skills.

Concept maps are also used for programming in different software. They are usually used in Unified Modeling Language (UML), UML is a complicated programming language that developers and programmers use to program software (applications or programs). But I won't go into detail there for two reasons 1) Because I know absolutely nothing about it! 2) Even if I did, this page is about concept mapping not UML. 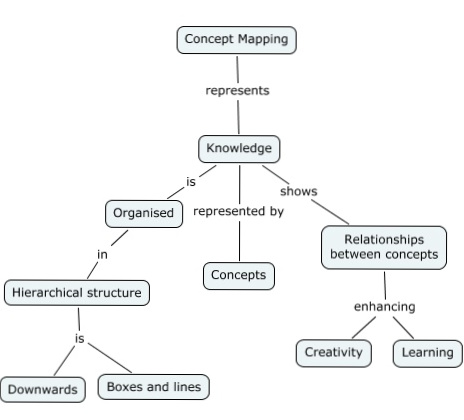 After reading this page, you may be interested in some of these other pages about concept mapping.

How to make a concept map
Step by step instructions on how to make that perfect concept map. Complete with illustrations to guide you along the way.

Return to home from concept mapping


[?]Subscribe To This Site
Copyright The-Organic-Mind.com 2009 - All Rights Reserved